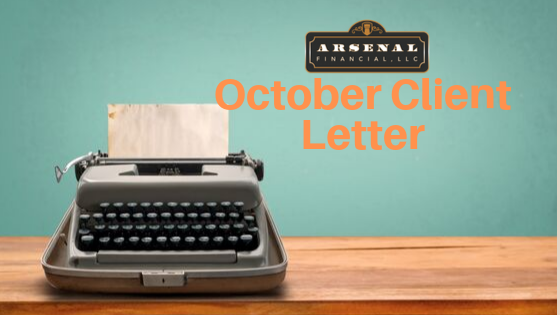 As we get into Fall some ups and down here with our local sports teams.   A disappointing Red Sox season is now behind us and we are well into a promising football season with that New England chill creeping into in the air.

With three-quarters of the year is behind us both stock and bond markets have had a strong year so far, although we expect to see regular — but normal — bouts of volatility as we progress through the fourth quarter. In its first week October has lived up to its reputation as a volatile month, but it’s important to keep in mind that October has been the third strongest month on average for the S&P 500 Index for the past 20 years. We’ll be watching several key factors over the rest of the year as the weather continues to cool and end-of-the year activities heat up.

Trade and impeachment have garnered a lot of the headlines recently, but behind the scenes the U.S. economy has remained resilient. Economic data has been increasingly beating expectations. The most recent data points to third-quarter economic growth that’s consistent with the long-term trend of the current expansion, which is now more than a decade long.

Trade headlines have improved in recent weeks. U.S. and China negotiators are scheduled to meet October 10, and the Chinese recently began purchasing U.S. soybeans and pork products again. Reports that the United States would curb U.S. investment in China surfaced and were quickly refuted by the White House. Finally, with the 70th anniversary of the People’s Republic of China behind us, China’s leadership may be in a better position to strike some sort of a trade deal. Even a limited agreement could help shore up business and investor confidence.

While the impeachment process will receive a lot of press attention, we do not expect much impact on the economy or markets. The main risk is that the political discourse may harm investor confidence.

Recession fears have heightened recently following a soft September report on U.S. manufacturing from the Institute for Supply Management. Domestic manufacturers continue to struggle with slowing international growth, tariffs, and a strong U.S. dollar. It’s important to note, however, that manufacturing comprises just 12% of the U.S. economy based on gross domestic product, while consumer spending contributes nearly 70%. U.S. consumer spending remains in good shape with low unemployment and rising wages. Overall, fundamentals for the U.S. economy remain favorable despite trade uncertainty and increasing political risk in Washington, D.C. U.S. economic data has been exceeding expectations, and consumers continue to benefit from a solid labor market. With further progress on trade possible in the months ahead and more Federal Reserve rate cuts anticipated, this bull market may have room to run.

As always, we encourage you to contact us with any questions, and we hope you enjoy the early autumn weather.

The Small Business's Guide to Surviving the Coronavirus Pandemic

Whether your business has been temporarily closed by a state shelter-in-place order or is still operating as a provider of essential services, balancing your revenue needs with protecting the safety of your employees and customers can...

On the one hand, there is [fill in the blank]; but on the other hand, there is… Starting with the last week in July and for the first three weeks of August, investors celebrated that the S&P 500 had advanced for four consecutive...

Many of you already have estate documents, probably executed many years ago. You need an estate attorney to look over your documents every 10 years or so. Here are a dozen points to review. Do you have a will and powers of attorney for...